I mentioned the living room was huge. And that going into this project we knew there would be a lot of things that we just had to live with until we can save up some money to make this our dream home. But considering we just moved out of a house that we spent 6 years flipping and had considered it done, going back to square one was difficult to say the least.

So D and I agreed that we need to have some space that while maybe not at a dream state yet, would at least be comfy, clean and kid-friendly where we can have people over (another big reason for buying this beast). So we had to do something with the living room.

First step – paint. Believe it or not, we weren’t really feeling that green on the walls. Or the weird mirror over the fireplace.

Nothing like a man who paints in black gym socks.

The color we chose was Benjamin Moore’s Timberwolf Grey. In some light is more blue than grey but we love the rich color of it for this big room. The trim also got a fresh coat of bright white as it was more of an off-white even after cleaning.

Here’s a better before shot of the entire living room.

In that top photo you can also see the fantastic wallpaper that was hidden behind the mirror. We stripped that all off too – there were at least 3 or 4 layers on that one spot. But it was kind of fun to see all the different wallpaper designs from the different eras of the house.

And here’s the after. 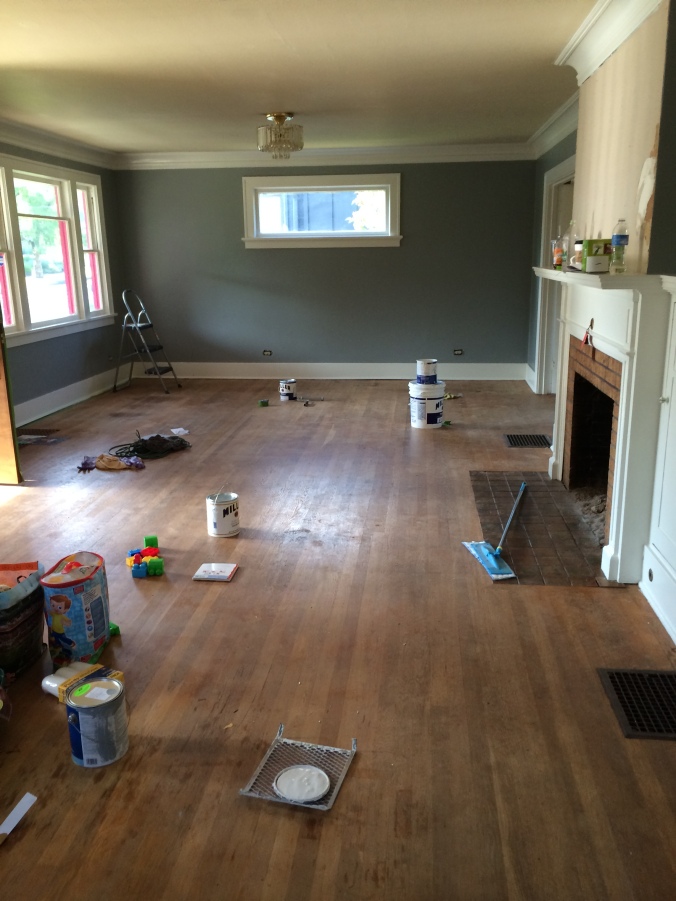 SO MUCH BETTER. I love this color. Its moody and holds up in a big room really well.

You can also start to see how icky the floors are. No matter how much cleaning was done to them, they always looked dirty. Plus there were water stains and pet stains. All throughout the big 3 rooms with hardwoods. So I begged Dylan to let us get quotes to have them refinished. We’ll tackle a lot of projects ourselves, but screwing up hardwoods was not something I was interested in doing.

We got a great recommendation from the folks next door who are flipping a house too. And unfortunately while we couldn’t get them done before we had to move in, we made it happen.

Hold on to your hats.

Here are some of the before’s – close up. Ick. 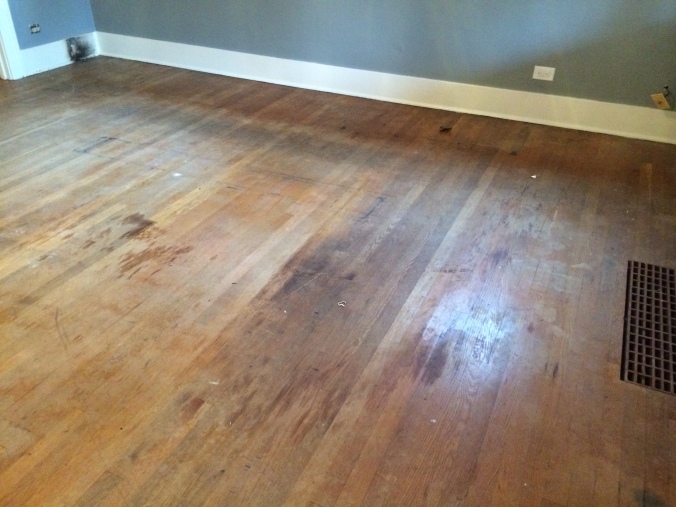 And floors after they had been sanded, but not finished.

Now wait for it. 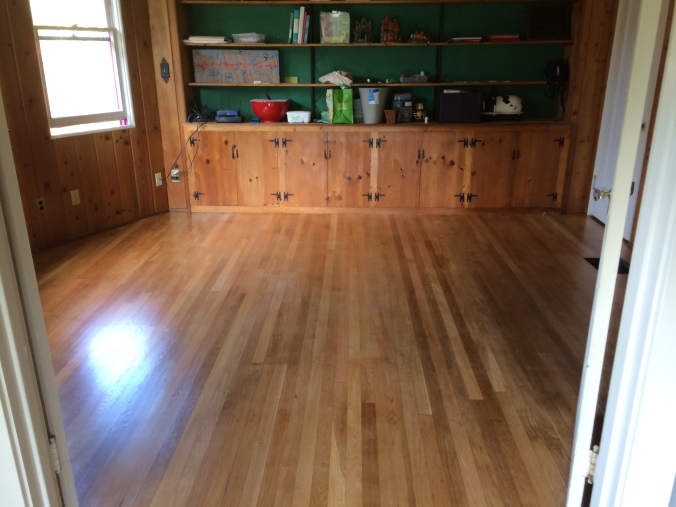 I may have spent an unnatural amount of time sprawled on these floors with my face pressed against their new smooth finish.

There were a lot of spots that needed to be torn and repaired. You would have no idea where that is, our contractor blended them in seamlessly. The wood is clear-grade white oak which is apparently as nice as it gets. And in the living room especially, some of the boards are REALLY long, which they don’t do anymore. So there is some great old charm to these floors that we were so happy to see restored to their former glory. I’m glad we left them natural and just put a clear coat on top of them. It may not be everyone’s taste, but with this house we are trying to balance restoring elements with bringing in new items as well.

So after the floors finished setting after a few days we moved furniture back in and even put some area rugs over some areas. And its such a nice cozy place and with P running around, it was really a priceless investment towards the livability of this house.